The table below provides details of the movement in average investment returns from various asset classes for the period up to 31 October 2019.

Past performance is not a reliable indicator of future performance. The Global Listed property reference index changed to FTSE EPRA/NAREIT Developed Rental NR Index (AUD Hedged) as of October 2019

After a period of predominately negative news, the leaders and trade representatives of the US and China made some progress in the form of the phase one agreement. As the two economic powerhouses approach the final stages of negotiating parts of the phase one deal, many analysts believe that a more comprehensive trade deal may be required before a sustainable improvement in market sentiment can be observed.

The US House of Representatives has voted in favour of formally proceeding with the impeachment inquiry against President Trump. Although this does not necessarily increase the probability of Trump’s impeachment, it shifts the inquiry into a more public phase. Amidst these politically difficult times for Trump, he appears to be discrediting the allegations against him and creating noise via Twitter. As displayed in the graph to the right, the frequency of Trump’s tweets has been increasing sharply throughout 2019 and has peaked in October with 1,018 tweets, equating to 32.8 tweets per day.

Although the UK Parliament has shown to support the general principles of Prime Minister Johnson’s Brexit deal, the MPs chose to postpone a vote on the deal until legislation required to convert the withdrawal agreement into UK law was completed. As a result, Boris Johnson was required to request an extension of the exit date, which has

Number of Tweets per month from @realDonaldTrump 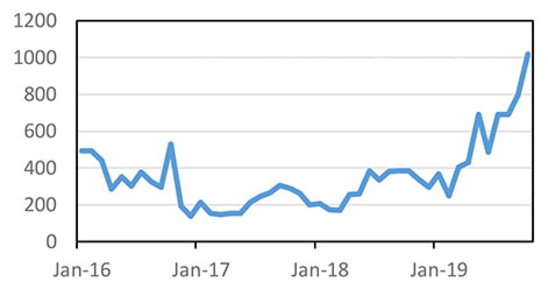 since been pushed back to January 31. Meanwhile, the UK Parliament has announced that a general election will be held on December 12. The probable outcomes are that either Johnson’s Conservative Party is re-elected as the government and allowing Johnson to more easily pass the existing Brexit deal, or, the Labour/Liberal Democrats win the election and hold a new referendum on the matter. In either case, the risk of a no-deal Brexit appears to be low.

The ABS announced that Australia’s Consumer Price Index (CPI) rose by 0.5% over the September quarter, totalling to a 1.7% growth year on year. The largest price increases in the September quarter were international holiday, travel and accommodation (+6.1%), Tobacco (+3.4%), property rates and charges (+2.5%), and childcare (+2.5%). Some notable decreases in price include automotive fuel (-2.0%), fruit (-3.1%), vegetables (-2.5%). Despite the price falls for fruit and vegetables, it is important to note that the drought has caused a wider increase in food prices, especially for meat and seafood (+1.7%), dairy and related products (+2.2%), bread and cereal products (+1.3%).

Although the RBA inflation data did not justify an RBA cash rate cut in November, it remains subdued below RBA’s target band for inflation of 2-3% per annum. As a result, a range of analysts believe that a rate cut in December 2019 and early 2020 is still likely. 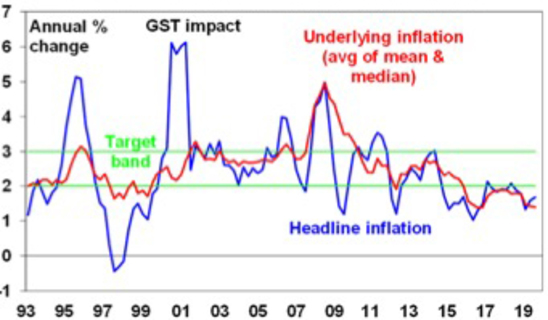 Although global economic conditions appeared to improve slightly in October with the US-China trade deal making progress and a no-deal Brexit seeming less probable, the uncertainty of their outcomes limited the improvement of investor sentiment, with global markets growing slightly less than in September.

International shares were up 1.9% on a currency hedged basis in October. US shares outperformed the global shares index, growing by 2.0% whereas the European equities market lagged its global counterpart with an increase of 1.2%. Key contributors include German stocks (+3.5%) and UK equities (-1.9%) as the uncertainty around Brexit continues to loom. Japanese equities led the global market, gaining 5.4% to achieve its second consecutive month of above 5% growth. Emerging markets shares finished 2.0% up, with strong contributions from China (+2.7%) and India (+4.0%).

Australian equities lagged the global stock market in October, falling by 0.4%. The Australian market displayed mixed returns across both defensive and cyclical assets. Healthcare was the strongest performing sector, growing by 7.58%. Other notable performances include Industrials (+2.97%), Utilities (+1.39%) and A-REIT (+1.24%). The largest domestic underperforming sectors included IT (-3.94%), Financials (-2.82%) and consumer staples (-2.20%) as some consumer staples companies continued to be adversely impacted by the drought.

Some top performing stocks in the S&P/ASX100 in October included CYBG (+24.5%) which bounced back after dropping over 18% in September and Iluka Resources (+17.6%) which announced a review of its business structure. BlueScope Steel (+11.0%) appeared to benefit from slightly improved market sentiment after the easing of US-China trade tensions. The stock price of WiseTech (-24.6%) took a hit in October after questions on the quality of their reported earnings. Despite its considerably strong performance in September, Afterpay fell 19.5% in October as sector regulation risks were renewed. Northern Star (-10.6%) was one of many gold stocks that were adversely impacted as the All Ords Gold index fell by 6.68%.

Overall, Australian equity returns remain high despite the Westpac-MI Leading Index indicating an expected downturn in economic activity. October’s slight fall in domestic stocks may be an indicator of this activity beginning to impact the Australian share market.

Australian listed property grew by 1.4% in October, improving considerably on its negative growth in September. Despite its enhanced performance the domestic listed property market continued to lag its global counterpart which grew by 1.8%.

Your monthly economic and market update 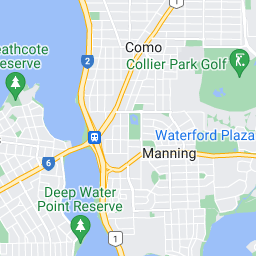 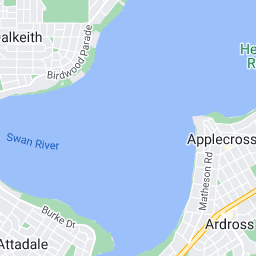 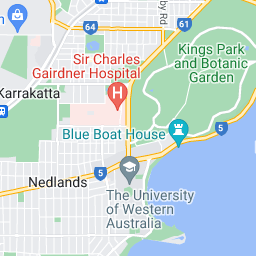 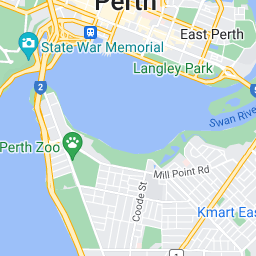 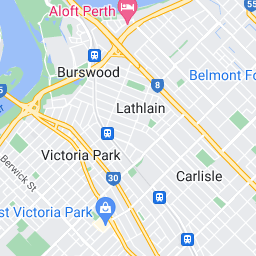 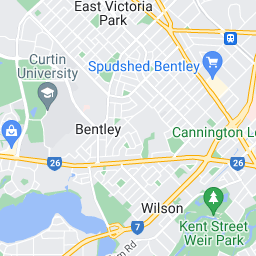 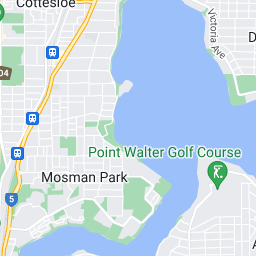 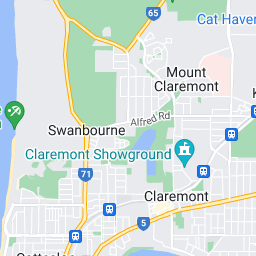 Preston Enterprise (WA) Pty Ltd ABN 84 021 202 454 trading as Vision Financial Strategies is an Authorised Representative and its advisers are Credit Representatives of Charter Financial Planning Limited, Australian Financial Services Licensee and Australian Credit Licensee (02) 9367 2113. Any advice contained in this document is of a general nature only and does not take into account the objectives, financial situation or needs of any particular person. Before making any decision, you should consider the appropriateness of the advice with regard to those matters. If you decide to purchase or vary a financial product, your advisers, our practice, Charter Financial Planning Limited, its associates and other companies within the AMP Group may receive fees and other benefits, which will be a dollar amount and/or a percentage of either the premium you pay or the value of your investments. Ask us for more details. If you no longer wish to receive direct marketing from us please call us on the number in this document and if you no longer wish to receive services information from AMP, you may opt out by contacting AMP on 1300 157 173. To view our privacy policy visit www.charter.com.au

If your income stopped today, who would pay your bills?

Changes to the age pension

Another article we recommend for you:

If your income stopped today, who would pay your bills?

Ready to get started? Let’s work together.